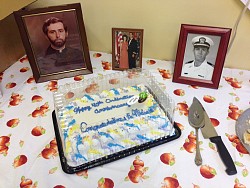 On Sunday October 6th, St. Mark's recognized Archpriest Michael Sekela for his fortieth anniversary of ordination to the Holy Priesthood.  Fr. Michael was ordained on October 14, 1973.  Additionally, he and Mat. Teresa were recognized for their 48th Wedding Anniversary which falls on October 16th.  And to round off the family celebration, their grandson Matthew was included in the Many Years offered to his grandparents as he celebrated his birthday on October 9th.  Congratulatory letters for both occasions were presented to the Sekela's from His Grace, Bishop Mark and a reception in their honor in the Church Hall was held following the Divine Liturgy. Following a ministry that saw him serve in parishes throughout the U.S. and in the military. Fr. Michael retired and is attached to St. Mark's where his daughter Larissa, son-in-law Chuck and grandson, Luke and Matthew are members.

May God Grant Fr. Michael and Mat. Teresa Many Happy and Blessed Years!